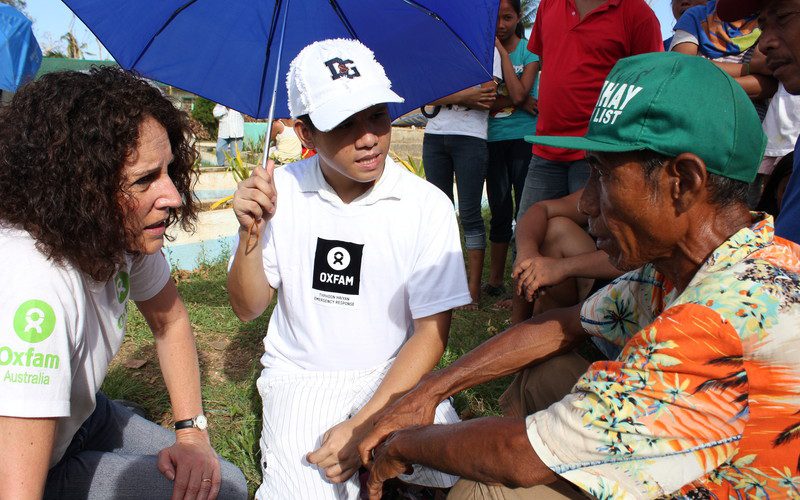 Dr. Helen Szoke, Oxfam Australia Chief Executive in Paypay, Cebu. Hygiene and water purification kits were given to 800 families in the coastal region of Daanbantayan which was badly affected by the typhoon. Photo: Chee Chee Leung/OxfamAUS

Responding to remarks made overnight in London by Australia’s Minister for International Development and the Pacific that “it could be politically difficult to increase aid spending” because of a perceived lack of public support, Oxfam Australia Chief Executive Helen Szoke said:

“Oxfam is alarmed by claims made overnight by Minister for International Development and the Pacific Concetta Fierravanti-Wells in London that a majority of Australians don’t support an increase to Australian aid.

“Her comments expose three weaknesses in the Government’s view of our support of the world’s poorest people. Firstly, when Australians are given the facts about the number of people needing assistance in the world and that aid spending is actually very low, the level of public support for aid increases.

“As our peak body ACFID has pointed out, last year, the biggest share of online charity giving in Australia was to aid and humanitarian charities, with over 1.6 million Australians giving $920m from their own pockets.

“Currently, Australian aid accounts for less than 1 per cent of all budget spending and is only 22 cents in every one hundred dollars of gross national income.

“Australians care about people doing it tough at home and abroad and know that we can support both and help our neighbours, whether they live in the house next door, the country next door, or other poorer parts of the world.

“Secondly, as the world grapples with extreme poverty, rising inequality and multiple humanitarian crises, it is unconscionable that the Government has said our support to the world’s poorest people is ‘politically difficult’ to justify and refused to commit to reversing cuts, even though Australia can afford them.

“People in the Pacific and beyond need our support to tackle poverty, inequality and climate change. Aid should be a priority for any government that is committed to building a safe and secure world free from poverty and inequality.

“As the Minister herself has stated, aid is ‘an investment, not a hand-out’ and we ask her to follow through on her promise to show leadership in her portfolio and defend our work supporting the world’s poorest people and their communities.

“Lastly, we know that aid works. Aid paid for a global vaccination campaign that virtually eradicated polio, and the mass distribution of insecticide-treated mosquito nets in sub-Saharan Africa, which halved the mortality rate from malaria and saved the lives of millions of children.

“Australia needs a generous, time bound and stable aid program, much like the UK has today, that leaves no one behind, bolsters the capacity and responsibility of countries to provide for all their people, and helps to build resilience in an increasingly risky world.”