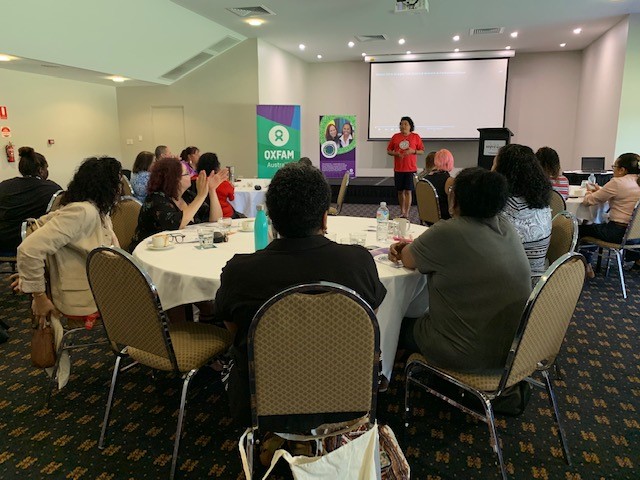 Inspiring and determined Aboriginal and Torres Strait Islander women from across Queensland will gather in Townsville today for the region’s first Straight Talk summit, where they will build on their skills to become powerful advocates for making a difference in their communities.

Bringing together women from areas including Townsville, Brisbane, Cairns, Mount Isa and remote islands in the Torres Strait, the three-day Oxfam Australia Straight Talk program gives participants a forum to share their ideas and develop strategies to tackle inequality through political engagement.

The Straight Talk program, which has brought together about 900 Aboriginal and Torres Strait Islander women since it was started by Oxfam Australia a decade ago, connects women with the political system and a network of like-minded participants.

Straight Talk Facilitator Michelle Deshong, who has led the Straight Talk program since it began in 2009, said she was looking forward to the regional summit being held in her hometown.

“Straight Talk empowers women to become effective advocates for change and to lobby decision-makers for change that will bring about greater equality on the issues that matter to them – the issues that are affecting their families and their communities,” Ms Deshong said.

“The Townsville summit will also be attended by Queensland State MP Cynthia Lui and former Federal MP Cathy O’Toole, who will share with participants their invaluable insights and experience on connecting with Australia’s political systems.

“I am particularly excited about Straight Talk being held in Townsville, providing me with an opportunity to work with local women who are already demonstrating strong leadership and drive for change.”

Oxfam Australia Straight Talk Program Coordinator Worrin Williams said the regional summit, which would be attended by about 25 participants, inspired women with the confidence and tactics they needed to take on the challenges that were important to them.

“Women have a critical role in leading change and tackling inequality in their communities,” Ms Williams said.

“The regional summit will bring together women from a range of backgrounds to discuss common issues they may be facing in their communities – issues such as building better futures in areas of social justice, community development and representation  – as well as challenges that may be relevant to their own lives and families.”

For more information or interviews with Ms Deshong, Ms Williams or participants in your area, please contact Amanda Banks on 0411 449 653 or amandab@oxfam.org.au